What is Real Tennis?:
Real tennis is the original indoor racquet sport from which the modern game of lawn tennis is descended. It is also known as jeu de paume in France, “court tennis” in the United States, “Royal Tennis” in Australia. It is still played by enthusiasts on 47 existing courts in the United Kingdom, Australia, the United States, and France.
A real tennis court is enclosed by walls on all four sides, three of which have sloping roofs, known as “penthouses”, beneath which are various openings (“galleries”) from which spectators can watch the game. There is also a buttress (tambour) which intrudes into the playing area off which shots may be played.

The Rules of Real Tennis 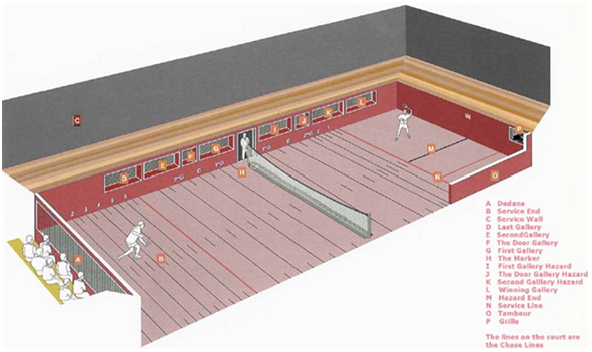 The court is divided by the net into two sides. The side from which thE game is normally viewed by spectators through the dedans is called the service side. The other is the hazard side. The serve is always delivered from the service side; and the ball is struck to bounce at least once on the hazard side of the penthouse roof and then on the floor within the service court.
Points are won or lost when errors are made (e.g. by hitting the ball into the net or out of the court). They may also be won by striking the ball into the winning openings (i.e. the dedans, grille or winning gallery) or so that it bounces on the floor for the second time between the service line and the end wall at the hazard end. If a ball bounces twice anywhere else on the court or enters any other gallery before a player touches it, a chase is set (said to be laid).
Scoring in Real Tennis is the same as that adopted by lawn tennis (viz 15, 30, 40, deuce, advantage, game;) except in Real Tennis the score of the winner of the point is always called first. The first player to six games wins the set.
When a chase is laid the score does not change, that chase is noted and held in abeyance until the chase is played off. When two chases have been laid, or if there is one chase outstanding and the score is at game point (e.g. one player is at 40 or advantage), the players change ends.
After changing ends, the chase or chases are played off in the order in which they were laid. When chases are played off, the receiving player (or server in the case of a hazard chase) must hit his/her shots so that their second bounce is closer to the back wall than the chase being played. For example if the chase is 6-yards, he/she must play to 5,4,3,2 or 1 yard on the second bounce in order to win the chase and the point. If the ball falls short of 6 yards on the second bounce the chase is said to be lost and the server wins the point.
The lines on the floor are positioned to mark the floor equivalents of gallery chases and to measure the length of the other floor chases in yards from the back wall (e.g. if the second bounce was on the 6-yard line, then chase 6 has been laid). Chases that occur at the hazard end are called hazard chases.
The terms one and two, two and three etc. denote that the ball has landed on its second bounce equi-distant between the two chase lines. The terms ‘better than’ and ‘worse than’ are used to give more precision to marking chases (e.g. ‘better than 4 yards’ denotes that the ball has landed on its second bounce nearer to the dedans back wall than the 4 yard line. ‘Worse than 5 yards’ denotes that the ball has landed on its second bounce further up the court than the five yard line).

A History of the Royal Game of Tennis
Reproduced from www.tennisandrackets.com

Scholars tell us that hand-ball (jeu de paume in French) was played by the Greeks and the Romans, and by even earlier civilisations. The shape of the court, as we know it today, evolved slowly over the Middle Ages, but by the end of the 15th Century, approximate dimensions had been agreed, an overall length of 90 ft and a breadth of the 30 ft.here are references in the classics to a game that was played in a stone court, as is fives in our country today. Pilare, in Latin, was to play ball and pila was the word for a ball. Hence, palla in Latin and pelote in French. The Roman legionaries, moving into Gaul, perhaps brought the custom of hand-ball with them. What is certain is that the game came to be played against the walls of town buildings and keeps of castles, and in and outside monasteries and ecclesiastical buildings. At a time when England held vast territories in France, the game was not slow to spread to our island. Indeed, the origin of the word tennis is thought to stem from the Anglo-Norman imperative tenetz! The cry of warning given by the server, “Take this! Play!”